In the grey space between utopia and dystopia we who are jackals live on the edges. Opportunistic omnivores are unavoidably circling your city! There have always been jackals, there always will be jackals. We are the ones who put your tech to use, the ones who recycle the glut and make it useful in aesthetic glory. The technology is neither servant nor master, but merely our raw material, to gnaw, rework, shape and build.

The Jackals are a nomadic band of technology scavengers who repurpose obsolete and discarded technologies to create enigmatic, absurd, and chaotic future inventions. A project of the TangentLab Collective, the Jackals are probably best described as a kind of guerilla hacker street theater. During an event, the Jackals invade and set up camp anywhere from a sidewalk to a museum to a convention center, bringing soldering irons and software. Scavenging obsolete technologies from public donations, thrift stores, and back alleys, the Jackals then set about repurposing this material for their own ends. All of this work is done in public, making the process as much the focus of the project as the finished objects. The process is both visible and open, designed to engage the public in the act of making.

Common themes in Jackal projects include:

The Jackals are a project of TangentLab, a small group of artists who bring collective and collaborative strategies to their technological interventions.

The Jackals at VERSION>02, Museum of Contemporary Art, Chicago

The Jackals invaded the Version>02 festival at the Chicago Museum of Contemporary Art, hauling in piles of video monitors, computers, slide projectors, soldering irons, and broken electronic toys despite protests from the festival organizers. The Jackals inhabited their makeshift camp through the duration of the festival, slowly transforming the electronic detritus into strange new creations. These included the JackalVision wireless video suits, Killer the Robot Dog, and the Jackal PDA (Personal Data Annoyance). The Jackals took turns building while others presented improvisational circuit-bending performances or slide lectures with found slides.

Most art and technology or new media festivals include a section for web art, presented in browsers on individual PC stations. Festival-goers universally take this as an opportunity to check their email, in effect re-appropriating the web browser back from its new status as art-site. Towards the end of the festival, two of the Jackals made their way onto an aptly-named panel entitled “Creative Technology as Weaponry” where it was revealed that they had been running a Carnivore client on the museum’s LAN, streaming the data packets of all email-checkers onto their pile of ancient monochrome monitors in the front lobby.

The Jackals at Summer Solstice, Museum of Contemporary Art

The Jackals returned to the Chicago Museum of Contemporary Art for Summer Solstice, the Museum’s annual midsummer 24-hour art party. In the Jackal GamePod, classic videogame consoles were wired together to produce luminous video abstractions. The GamePod apparatus begins with high-paced, aggressive live game imagery, and extracts, layers, magnifies, and saturates minute details of the image, transforming it into something lush and contemplative.

SIGGRAPH is the premiere annual worldwide conference on computer graphics, featuring the latest research and products in 3D animation, visualization, rendering, entertainment and simulation, motion capture, and visual effects. During the week-long conference, the Jackals set up camp at the convention hall, bringing their scavenged and hacked creations into direct contrast with the gleaming, cutting-edge technologies inside.

The San Antonio convention center was a particularly interesting site, with the downtown’s public riverwalk cutting through its center. This location gave the Jackal three distinct audiences – the electronic art crowd at the SIGGRAPH Art Gallery, engineers and scientists from the main SIGGRAPH conference, and the local and tourist population of San Antonio itself.

As we design information and communication technologies to become increasingly ubiquitous and intimately tied to our bodies, there is a paradoxical effect of, on the one hand, a hunger for freedom and mobility and, on the other, the entangling weight of this connectivity itself. As the ad campaign for Microsoft Windows Mobile promises, anywhere you go, you can “Take Your Office With You.”

The Data Weather Balloons, built from scavenged surplus home alarm systems, are designed to pick up WiFi transmissions and sonify the data*. Each cluster of balloons carries an antenna, circuitry, speaker, and battery pack. By guiding the balloons through the air, through different spots and at different altitudes, one can find currents of WiFi transmission. When converted to audio streams, the WiFi data is reminiscent of bird calls; grouping a large number of the data balloons around a specific site creates a chorus of electronic squawks, chirps, and trills in response to different WiFi frequencies. Carrying the balloons around a site, one can identify ‘hotspots’ and follow vectors of network transmission. The data weather balloons are a way of allowing a direct, embodied understanding of the invisible currents of information that permeate the air around us, reminding us that even in as radio waves, information does have a physical presence. 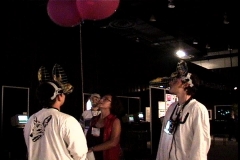 The only actual components are (1) hacked surplus alarm systems and (2) a bunch of helium balloons. There is not really a WiFi sensor of any kind on the balloons, they’re instruments